The theme and concept of NewGenGold were formulated by Keith Yates in 1994 and the first conference was held at the Burswood Convention Centre in Perth, Western Australia in 1995 in association with the Australian Mineral Foundation Inc. At that time the title of the biennial conference was New Generation Gold Mines and it was not until 2001 that the acronym NewGenGold was adopted.

Since 2003, NewGenGold has been jointly organised by Paydirt Media Pty Ltd and Keith Yates & Associates Pty Ltd and consistently held in Perth every second November..

The very successful initial event was held after an eight year long gold exploration boom in Australia. As a result, the significant number of local discovery case histories precluded the requirement to feature additional overseas gold discoveries to fill the programme of sixteen presentations.

With only a few exceptions the 1997 and 1999 programmes featured discoveries by Australian companies located in Australia, however by 2001 the event had assumed the mantle of the world’s pre-eminent gold exploration conference featuring a truly international array of discoveries. This reputation has become firmly entrenched since then and the conference consistently features the case histories of most of the world’s more important gold discoveries attracting the sponsorship of major international gold producers and delegates from all points of the globe.

“As you all know this NewGenGold is the tenth in the biennial conference series which began in 1995. As organisers we believe this is an occasion worthy of celebration. In doing so it is worthwhile looking briefly at the history of the event. The NewGenGold conference concept and theme was spawned in 1994 after a presentation here in Perth that same year at the Geological Society of Australia Annual Conference by Dr David Gellatly. The paper entitled “Recent greenfields gold discoveries in Western Australia – the roles of geology, new technology and corporate enterprise” covered around half of the discoveries which were ultimately featured on the program of the inaugural conference in 1995. We are pleased that David is with us here this evening and I thank him for the stimulation his paper provided me. 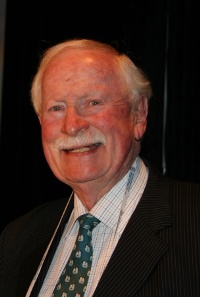 From this germ of an idea I became convinced that, as an important element in their professional development, gold exploration and mine geologists should have the opportunity to become familiar with the case histories of more recent and important gold discoveries.

My perception was that the case history presentations would address the questions of “where, why and how” the discoveries were made and that presenters would be encouraged to factually present the events leading up to the discovery, warts and all!

We all know that discoveries do not come easily and that in virtually every case there are setbacks, blind alleys, tank traps and even outright mistakes. It can be as professionally beneficial to learn about such adverse developments as it is to hear about the positive and rewarding steps in the discovery process.

The structure of the program was to be designed as a stimulating and motivational learning experience for all the delegates attending. They would have the opportunity to bask in the successes of their peers and consequently be motivated by the experience to apply newly acquired knowledge to their own exploration endeavours.

The first conference, entitled “New Generation Gold Mines”, was held at the Burswood Convention Centre in Perth in November 1995 and was jointly organised by The Australian Mineral Foundation and my consulting company. It was not until 2001 that the acronym NewGenGold was invoked. The initial event was a resounding endorsement of the theme with almost 600 delegates in attendance.

All subsequent conferences have been held in this city every second year in late November. Unfortunately the global discovery rate of quality gold deposits has never warranted an annual event.

Since the closure of Adelaide’s Australian Mineral Foundation in 2002, NewGenGold has been jointly organized with Perth’s Paydirt Media and I would like to take this opportunity to acknowledge the acumen of Bill Repard and his team for their professional organisation of the six subsequent conferences, each of which has consistently adhered to the original theme. Thank you Bill and the team it is a creditable achievement to reach this milestone.

The very successful initial event was held after an eight year long gold exploration boom in Australia. The early part the 1990s was a stellar era of gold discovery in this country, the national significance of which will become apparent a little later. The result was that the significant number of local gold discoveries precluded the requirement to feature additional overseas deposits to fill the standard program of sixteen presentations.

The 1997 and 1999 conference programs largely featured Australian discoveries and to a lesser degree overseas discoveries by Australian based companies. It was however becoming increasingly apparent that the longevity of the conference would depend very much on its becoming a truly international event.

By 2001 overseas gold discoveries dominated the program and, over the years since then, the event has progressively assumed the mantle of the world’s pre-eminent gold exploration conference featuring a truly international array of discoveries. This reputation has become firmly entrenched and over the past decade the conference has consistently featured the case histories of most of the world’s more important gold discoveries.

Along the line we have been fortunate that this reputation has attracted Principal Sponsors such as Boart Longyear, and more recently Pinnacle Drilling, and consistent sponsorship and support from major international gold producers such as Barrick, Newmont and Gold Fields as well as from a wide spectrum of exhibitors. It would not be possible to hold an event of this standard without this support for which we are most grateful.

This brings us to the celebratory stage of proceedings. We are fortunate to have with us tonight nine of the original sixteen presenters from the 1995 conference who are here as our special guests. We extend a special welcome to these people and their respective wives. I will be asking them to come forward one by one in order of the 1995 program to receive a gift of our sponsor’s wine. We will be screening brief details of the mines which eventuated from each of their discoveries and I will be asking you to express our appreciation at the close of this segment.

You will be struck by the quality of many of these mines six of which are still in production. Some have been in operation for 20 years or more with respectable gold production rates and impressive cumulative production. Several of these mines are expected to be producing for a number of years to come.

Production to date from all 16 deposits on the program is in the order of 45 million ounces. It was indeed a stellar period of gold discovery in this country!

We now have Ian Herbison who spoke on Jundee. He is here with wife Linda. This mine ultimately absorbed the nearby Nimary operation about which Guy Lewington of Eagle Mining spoke in 1995. Jundee which has been owned by Great Central, Normandy and now Newmont is still in production having produced more than 6 million ounces since 1995

Trevor Ireland spoke on Callie in the Northern Territory, which has produced well in excess of 5 million ounces over the past 20 years and may accumulate up to double that in the long run. Discovered and commissioned by North Flinders, it was also operated by Normandy before being acquired by Newmont in 2002. Trevor is here with his wife Carolyn.

Roger Thomson presented on the Sunrise discovery made by Delta Gold and developed by the Placer/Delta joint venture before ultimately being acquired by AngloGold Ashanti. Its impressive production is over 8 million ounces and counting – a truly great discovery

We are fortunate to have as our guest tonight Dan Wood who was the leader of Newcrest Mining’s exploration team from the mid-1990s until his retirement in 2008. Newcrest was judged by Metals Economics Group to be the world’s most successful gold explorer in the period 1992 to 2005. We wholeheartedly endorse that rating based on Newcrest having presented on six high quality discoveries at our conferences

from 1995 to 2011. Dan tells me he used to regularly offer the incentive to feature at the next NewGenGold as a motivating tool for his geologists. In recognition of his achievements Dan received the prestigious Thayer Lindsley Award at this year’s PDAC Conference in Toronto. At the 1995 conference Dan presented on Cadia Hill in central NSW, the first of a string of discoveries in the Cadia Valley which is now one of Newcrest’s prime production centres. From 1999 over 4 million ounces were produced from the original Cadia Hill pit. This mine is only one of a few on the original program uninterruptedly operated by its discoverer.

We now turn to McKinnons a smaller deposit also in Central NSW on which Mark Elliott of Burdekin Resources contributed. Unfortunately its grade did not justify an extension to underground mining. Mark is here with his wife Susan.

The Kanowna Belle case history was presented by David Gellatly who I referred to earlier as the person whose paper provided me with the stimulus to formulate the NewGenGold concept. This mine was discovered and developed by Delta Gold and, after several ownership changes, Barrick Gold is now the operator. Production to date is well over 4 million ounces.

Last but far from being least is Plutonic and Wally Bucknell is our guest who presented on behalf of Plutonic Resources. This discovery was made by Great Central Mines in 1988 then purchased by Plutonic Resources followed by Homestake and in 2001 by Barrick Gold the current operators. A first class discovery, it has produced 5.6 million ounces over the past 23 years.

I would be pleased if you can join me in showing our appreciation to all nine of these people. I don’t intend to go through the remaining seven discoveries one by one but to show them on the screen to recognise the companies and the presenting geologists who could not be with us tonight. Ross Kennedy, a consummate and dedicated explorer who spoke on Marymia, sadly passed away in 2008.

Ladies and gentlemen NewGenGold has carved out a place for itself on the international mining conference calendar and we hope that it continues to meet its stated objectives for you our clients. Thank you for your continuing patronage.” 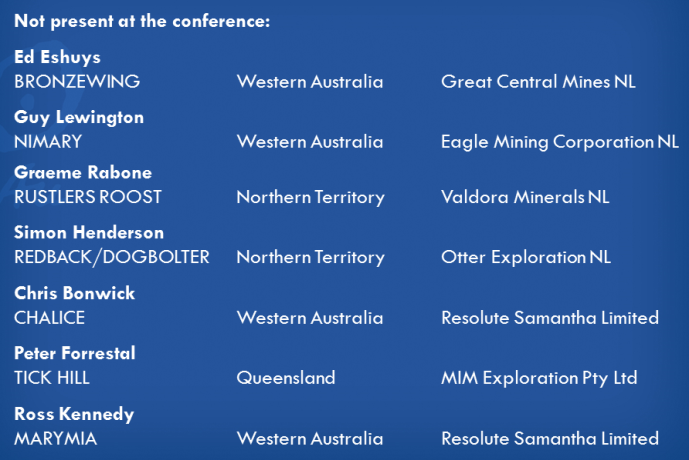 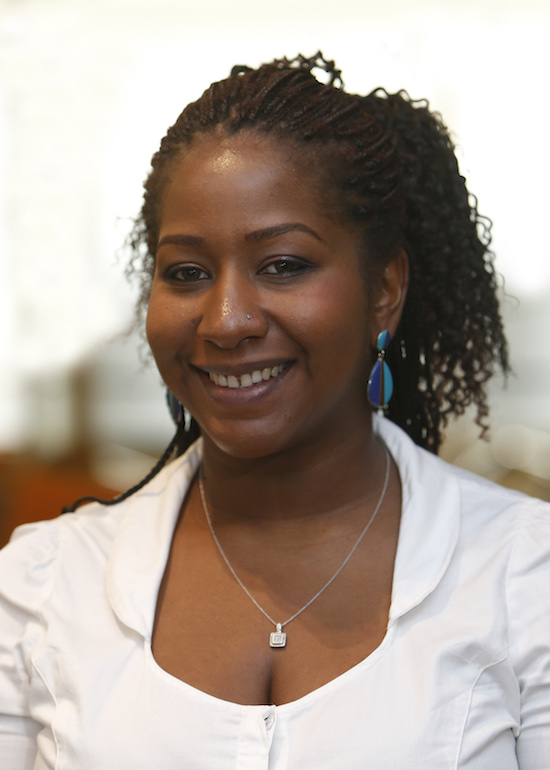